Take a leap back in time to farm life from decades past. Wagner Farm provides a unique opportunity for families to learn about its heritage. The Heritage Center is home to many exhibits that teach “life on the farm” during early 20th century. Shop at our 1930’s Grocery Store or purchase a souvenir from the Museum Store.

In 1920, Thomas and Julia Wagner moved their family into a newly built brick house complete with electric lighting and indoor plumbing. One hundred years later you can visit this very house, and surrounding farm to see what it was really like to live in the roaring 20’s.

The Historic Wagner Farm represents a historic jewel of the North Shore and the site of the highly-popular Glenview Farmers Market and Historic Wagner Farm Heritage Center. An educational destination for scout troops, schools, daily visits, and birthday parties, the staff at the Wagner Farm continues to design and incorporate fascinating programs and events to provide a taste of local farm life from the past and the important role that farming plays in today’s culture.

This 18.6 historic acre farm is the last remnant of the farm owned by members of the Wagner family since their arrival from Trier, Germany in the 1850s. Wagner Farm was owned by the family until the last surviving member Rose Wagner died in 1997.

Following Rose’s death, a group of local citizens approached the Glenview Park District and asked its leaders to buy and preserve the property. It was their wish for the farm to be maintained as an historic working farm for the education and enjoyment of the community. With citizen support, the park district purchased the farm in 2000.

Serving over 140,000 annual visitors, Wagner Farm has become a prosperous land that gives back to the community through education and it’s plentiful supply of produce.

The park district, assisted by representatives from the community, embarked on a master planning process to set guidelines regarding the future uses and development of the farm. Guided by this master plan, the park district has repaired and restored the barn and farmhouse, added chickens and pigs to the farm’s livestock, and introduced a number of programs and events to allow the public to experience the farm. Aided by the energetic fundraising assistance of the Friends of Wagner Farm, the park district constructed and opened the Historic Wagner Farm Heritage Center Museum in 2006.

Due to the historic nature of Wagner Farm as well as active farming operations, the Glenview Park District has adopted specific policies governing still and video photography. Filming and photography permits are now required for any commercial filming and photography including family portraits, wedding photography, any film that will be used in the production of any marketing materials, public service announcements, documentaries, training films, commercials, television films, or series, student films, feature films, or commercial art. Permit fees for professional portraits and candids is $50 per hour plus a refundable security deposit. For more rates, information, and to obtain the required permit, contact Andrea.Just@glenviewparks.org or call 224-521-2204.

Stop by the Farm and check out the new Farm Adventure Area! Play, explore and learn in this dynamic new addition to the Farm. It’s a unique hybrid between a traditional playground and an interactive agricultural education exhibit. The play equipment is farm-themed and allows kids to interact with a rural environment. Dig around in the sandbox, swing on a tire, climb into a corn crib, interact with a life-size dairy cow sculpture and pretend to run a farm stand. 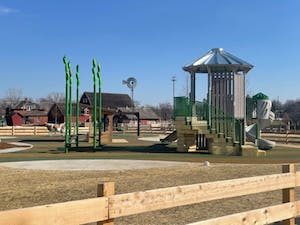 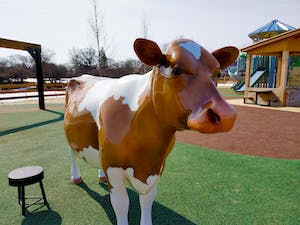 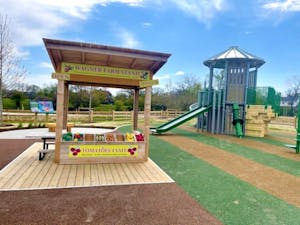 Step back in time with your students to a slice of rural American history with a trip to one of the last working dairy farms in the area.

We have a variety of hands-on programs that work towards or meet certain requirements for scout achievements and badges.

For the fourth season, the farm will be offering a limited number of shares through our CSA program. Interested in learning more?

Held every Saturday from 8 am to noon, June 18 through October 22, 2022. Information available soon!

Partner with us to donate food grown at Wagner Farm directly to the Northfield Township Food Pantry.

Always wondered what’s inside those silos you see on farms and what they’re for?

Learn all about it at the Historic Wagner Farm’s new interactive and educational silo exhibit inside the Heritage Center. You can:

In development for two years, the exhibit was made possible when farm staff rescued a two-story silo artifact that was was being decommissioned from the Sauder Village Museum in Archbold, Ohio. The silo exhibit is open when the Heritage Center is open. 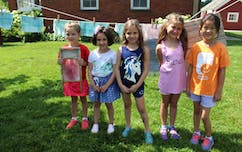 Lend a Hand: Become a Volunteer!

Find your Inner Farmer
Find your inner farmer at Historic Wagner Farm, one of the last working dairy farms in Cook County!  We’re open daily to the public for recreation and learning opportunities.  Our mission is to help people connect with their food, their farmers, and how food gets from the farm to their table.  Historic Wagner Farm has more than 100,000 visitors annually, including school children, families, special event attendees, community gardeners, farmers’ market shoppers and participants in a CSA that is run by the award winning Be@the Farm partnership with NSSED.  We raise crops as well as dairy cows, draft horses, chickens, pigs and lambs.  Help preserve our agricultural heritage by joining our dynamic volunteer program!

To Apply, complete an application online at applitrack.com/glenviewparks/onlineapp or fill one out on your next visit to the farm. For more information, send us an email at wfvolunteers@glenviewparks.org. 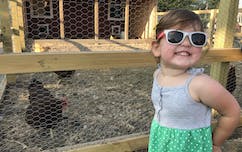 Become a Friend of Wagner Farm 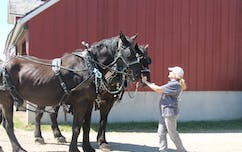 Share your Wagner Farm story and help preserve our history

Historic Wagner Farm launched an oral history project to collect and record the stories of community members who have personal knowledge of Glenview’s agriculture roots and memories of the Wagner family. If you would like to preserve your story for future generations, or if you would like to volunteer for the oral history project, please email us at wfvolunteers@glenviewparks.org. Click here for more information.

In search of a truly unusual venue for your next event, one your guests won’t stop talking about for months? Historic Wagner Farm’s award-winning Heritage Center Museum is the place.

Party ’til the cows come home with our special farm-themed birthday celebrations.

Visit the Historic Wagner Farm Museum Store and Cool off with a Sweet Treat!

While you’re visiting Historic Wagner Farm, stop by the Museum Store, located in the Heritage Center and pick up a nostalgic souvenir of your visit to Historic Wagner Farm. Featured items include books, t-shirts, postcards and toys. The store is open during the farm’s regular hours of operation. 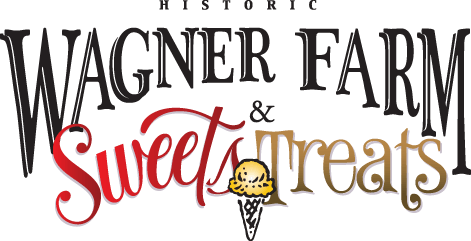 Sweets & Treats is located inside the Heritage Center.