Dig It! The Secrets of Soil exhibit opens at The Grove on International Mud Day

The Grove celebrates International Mud Day on June 29, 2022 from 11-2 p.m., with the opening of the “Dig It! The Secrets of Soil” exhibit as well as the interactive Soil Scientist exploration area. Following its opening, the free exhibit will stay open all summer long on Fridays from 10-2 p.m. and Sundays 1-4 p.m.

Diane Michalski, The Grove’s Program Supervisor, oversees this new exhibit ensuring International Mud Day at the Grove is both fun and educational for all.

“Soil is something we walk on every single day that no one really stops to think about and how important it is to our survival and everything else on the earth,” Diane said. “Food comes from it, animals live in it, we live on it, and a lot of our houses are made from it. So, now we’re just taking soil and getting people in it.”

The creation of this exhibit at The Grove was inspired by the original Dig It! The Secrets of Soil exhibit at the Smithsonian National Museum of Natural History from 2008-2010. It is a portable, DIY version of the larger exhibit, with The Smithsonian providing educational materials and graphics for 16 panels covering topics such as what “ingredients” make up soil and how soil relates to human health.

The Grove has also added a Soil Scientist exploration area, where children can experiment in the mud kitchen, finger paint with mud on plexiglass art panels, meet creatures that live in soil at the worm table, and make their own mud through mixing different types of soil with water.

“Kids just need to be allowed to get loose in the dirt and get messy,” Diane said. “Besides, playing in mud is good for kids. It helps children develop tactile skills with sensory play. Mud play and other outdoor activities not only gets them away from screens, but provides fresh air, exercise, and sunlight. Mud play is also a teaching tool that can help children boost creativity, imagination, independent learning, and teamwork. We can all benefit from some mud play.” 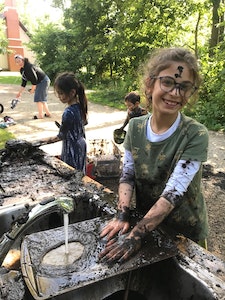 The Grove is one of only a handful of museums across the nation given permission to use the soil exhibit. The Grove received a 2022 Judy Beck Grant to print the panels and purchase display easels. Established in 2021, the Judy Beck Grant program honors Judy’s environmental legacy in Glenview and her 32-year service as a Glenview Park Board Commissioner. Awarded annually, it is a competitive grant that is available to non-profit groups or individuals with projects focusing on environmental conservation, sustainability, community engagement or youth development. The 2022 cycle of the Judy Beck Grant was generously funded by the Beck, Hurvis, and Straus Families.

“Because the grant was approved, we’re able to make International Mud Day bigger and more fun here at The Grove,” Diane said. International Mud Day was launched in 2009 to encourage children to make connections to the Earth and soil and discover the messy joy that comes from playing in and with mud. This is the first time The Grove is celebrating the day.

Being able to bring a national exhibit to Glenview is also thrilling for Diane because of The Grove’s connection to the Smithsonian Institution through Illinois’ first naturalist, Robert Kennicott. Kennicott spent his childhood and early adulthood observing nature and collecting specimens at The Grove in the 1800s. Eventually, he grew up to become a major collector for the Smithsonian Institution.

Join The Grove this International Mud Day to get the dirt on dirt while experimenting with soil and mud: the crust of the Earth we walk on every day.