The Glenview Park District is excited to announce the return of the full Independence Day Parade and Twilight Fireworks show. The festivities will begin with a Bike Parade, presented by Wesley Child Care Center and Edward Jones, at 11:15 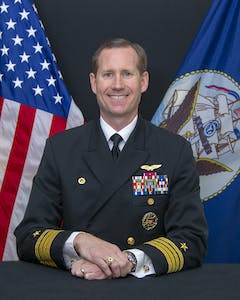 a.m. at Jackman Park. The Glenview Parade, presented by the Glenview Park Foundation, starts at 11: 30 a.m. at Glenview Road and Lehigh Avenue. The parade route travels south on Harlem, turns right (west) onto Central Road, and ends at John’s Park. The parade will be led by Grand Marshal Capt. Billy D. Franklin, commander, Navy Reserve Region Readiness and Mobilization Command, Great Lakes, and will feature parade floats and entries from over 60 local organizations.

Grand Marshal Capt. Billy D. Franklin is a 1996 graduate of the United States Naval Academy. He earned his Naval Flight Officer wings in November 1997. He earned a Master of Public Administration from University of Management and Technology and is a graduate of the Senior Executive Fellows Program at Harvard’s John F. Kennedy School of Government. He served in the Pentagon on the Joint Chiefs of Staff as the Electronic Warfare Assessments Branch Head and later as the Executive Assistant to the Director of Force Application and Support. He also served as the Head of Strategic Plans and Policy. Capt. Franklin wears the Legion of Merit, Defense Meritorious Service Medal, Meritorious Service

This year’s fireworks show will be bigger and better than ever, with 3,090 shells creating a 26-minute show synchronized to music. The Glenview Bank & Trust Fireworks and festivities in Gallery Park will begin at 5 p.m. and will feature food trucks and a live DJ, with the Glenview Concert Band performing at 7 p.m. A flyover of the P-8 Poseidon maritime patrol aircraft at approximately 8:30 p.m. will herald the fireworks at dusk.

“The history and heritage of the Navy here in the Village of Glenview specifically, and the Chicagoland region broadly, is incredible,” said Cmdr. Jeffrey Gray, public affairs officer for Navy Reserve Region Readiness and Mobilization Command, Great Lakes. “For instance, during World War II, Naval Air Station, Glenview, was home to the Carrier Qualification Training Unit that trained future U.S. President George H.W. Bush to land and take off from an aircraft carrier.”

“It’s a tremendous honor for the Navy to have been invited to participate in this year’s Fourth of July celebration,” Gray continued. “The leadership here in Glenview haven’t forgotten the courage and sacrifice of those who served their country and understand the importance of recognizing the legacy of service for future generations.”

The U.S. Navy’s presence in the parade this year is a return to Glenview’s glorious naval history. Glenview was once home to Naval Air Station, Glenview, from 1937 to 1995.  During World War II, nearly 9,000 aviation cadets received flight training at the air station, and approximately 18,000 were trained to land and take off aboard aircraft carriers on Lake Michigan. After the war the air station was used mainly for reserve training. During the 1960s, Glenview was home to the Air Barons of VF-725, often referred to as the Blue Angels. In its final years, the air station was exclusively home to Naval Air Reserve Training Command, units of the Marine Corps, Army, Navy Seabees, as well as a Coast Guard search-and-rescue team. On March 12, 1993, it was announced that the air station was slated for closure because of Department of Defense downsizing and budget cuts. Naval Air Station, Glenview, was officially disestablished on Sept. 30, 1995.

“We couldn’t be more excited to welcome the U.S. Navy to one of Glenview’s beloved traditions,” explained Glenview Park District Executive Director Michael McCarty. “The history of Glenview and the Naval Air Station is integral to this community’s history and development. What a fitting way to celebrate Independence Day.”