Fairy Sighting at The Grove! 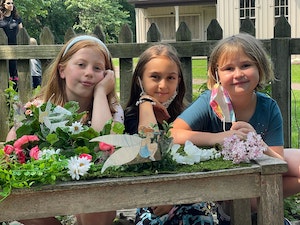 The Kennicott Girls Club, ages 7-12, recently participated in a program at The Grove’s Fireflies and Fairies Festival where they created their very-own Cottingley-inspired “Grove Fairy Photos”. It’s known that during times of conflict or difficulty, people turn to the “supernatural” for comfort. The Grove staff was inspired with the Cottingley Fairies of World War 1 story and conversations with Cantigny Park. 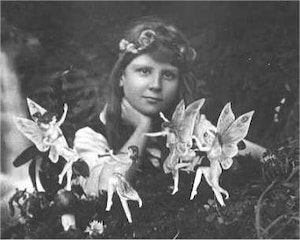 During World War I, especially in England, fairies were very popular. With the overwhelming stress and sadness brought on by the war, it wasn’t unheard of to believe in unbelievable spiritual beings like fairies during unbelievably hard times. While her father served in the military in 1917, young Francis Griffiths and her mother lived with her cousin Elsie Wright in Cottingley, England. Francis often came home muddy and wet from playing in the back behind their house and would blame her messy appearance on her playing with the fairies that lived in the back. To prove to her mother, she was telling the truth, she and her cousin Elsie produced the famous Cottingley Fairies Photos.

The Kennicott Girls Club took up the challenge to brighten the day of their friends and family by creating their own Cottingley-inspired “Grove Fairy Photos” during the Fireflies and Fairies Festival. Using materials that Francis and Elsie would have had available to them and a Polaroid camera (results are similar to the quality of photos from the time period), the KGC went to work to prove that fairies lived in Dr. Kennicott’s garden without the aid of photo retouching.

Participate in Your Own Fairy Quest! If you download “The Grove Glenview” free app to your phone, you’ll find a Free Fairy Quest.  Follow the clues when walking the trails and see the homes of some of the fairies that took up residence in the woods.